"For as much as you love Mary Most Holy, she will always love you much more than you can love her."

St. Ignatius of Loyola, whose motto was “Ad Majorem Dei Gloriam” (“For the greater glory of God”), was born into a noble family in Loyola in the year 1491. He pursued a military career, which abruptly ended on May 20, 1521. He was fighting to defend the castle of Pamplona when a cannonball broke his leg. During his convalescence, Inigo asked to read a book. He wanted to read a book on chivalry but the only books that could be found in the castle of Loyola were about the life of Christ and the lives of the Saints. At first he had little interest in these books, but soon he began to enjoy them and would spend entire days reading. He said, “If these men were made of clay like me, then I can also do the same as them.” This was the beginning of his conversion. He still had much to battle against between his attraction for God and a life solely dedicated to Him, and the glory and success that the world offered him. In the end, Inigo resolved to imitate the Saints. He went to the Holy Land, was imprisoned for the Inquisition, studied in Paris… all of which he did under the gaze of the Lord, who prepared a group of companions for him who would eventually form “The Company of Jesus.” All of the actions of this Saint referred back to the his goal to do everything “for the greater glory of God.” From the moment of his conversion, St. Ignatius placed all of his happiness in working for God and suffering for His sake. He died on July 31st, 1556. He was canonized in 1622.

“Let Them Confess and Receive Communion”

We have taken this section, “Life of Piety,” from the reports of Fr. José Ramón María Andreu, S.J. Although brief, it clearly shows a sincere and simple desire to be better and how, since the apparitions began, the girls had learned about what really matters.

You don’t experience Our Lady as your Mother? Read here how, in Garabandal, Our Lady was above all a Mother to the girls. She desires to act as a Mother with you and with all her children. Jesus gave her to us from the Cross and she accepted us as her children. These stories fill our hearts with trust and with a desire to have a relationship and a filial love for the best of all Mothers.

Many people ask themselves where and when the peculiarity of praying the Hail Mary adding "and our Mother" came about. You could say that it came spontaneously from some girls that experienced in a profound way the maternal love of Mary.

"Sacrifice yourselves for sinners and say often, especially when you make some sacrifice, 'O my Jesus, this is for love of You, for the conversion of sinners, and in reparation for the offenses committed against the Immaculate Heart of Mary."

In 1917 the Virgin Mary appeared to three shepherd children at Cova da Iria, Fatima. Their names were Lucia (10 years old), Francisco (9 years old), and Jacinta (7 years old). Preceding Our Lady's apparitions, the Angel of Peace had appeared to them three times throughout 1916, teaching them several Eucharistic prayers and encouraging them to offer sacrifices for sinners. The Virgin Mary appeared to the children six times between the months of May and October. She asked them to pray the Rosary and to offer sacrifices for poor sinners. She also asked that a chapel be built in her honor. In spite of their young age, the children happily offered sacrifices for the conversion of sinners and in reparation for the offenses committed against the Immaculate Heart of Mary.

"It's already been kissed" 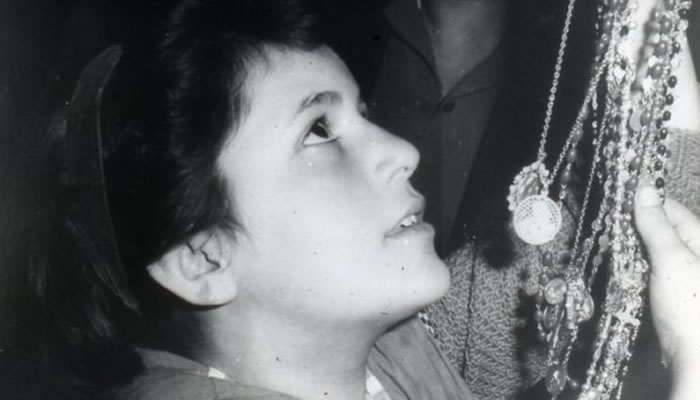 Francisco García Bañuelos is the grandson of Mr. Vitoriano, who was the school teacher in San Sebastián de Garabandal sometime before the apparitions took place. In the year 1961, Francisco lived in Santander and was 17 years old.

He received the first news about what was happening in his parents’ town in the Hospital of Valdecilla, where he was hospitalized during the whole summer due to an accident.

On June 19 and 23, 1962, the so-called "Nights of the Screams" took place. During the two nights, the visionaries were instructed regarding the "Warning" and the "Chastisement." The Virgin Mary revealed a vision to them of the Chastisement that would come if, after the Warning and the Miracle, the world did not change.

St. Rafael Arnaiz Baron was born on April 9, 1911 in Burgos, Spain. He studied in the Jesuit school, where he received his First Holy Communion in 1919. He showed a very great openness to the things that had to do with God from a very early age. The first signs of the illness that would mark the rest of his life appeared in 1922. His father, who believed that his recovery was due to the Virgin Mary’s special intervention, took Rafael to Zaragoza in thanksgiving and consecrated him to Our Lady of Pilar. As years went by, he developed many different traits, such as friendship. He also grew in his Christian life. God placed the desire in his heart to consecrate himself in monastic life. He met the Trappist monks of San Isidro de Dueñas and felt very attracted to that life, because he saw that it corresponded to his intimate desires. He entered there on January 15, 1934. He had to leave the convent three times due to the diabetes that God mysteriously used to test him. Each time he returned, he came back with more desires to be generous and faithful. These desires were fulfilled on April 26, 1938, when he left this world at only 27 years of age. He was declared Blessed by Pope John Paul II in 1992 and canonized on October 11, 2009.

On May 13, 2017, we celebrate the 100th Anniversary of the first apparition of the Blessed Virgin Mary in Fatima. She appeared to three shepherd children: Lucia (10 years old), Francisco (9 years old), and Jacinta (7 years old).

What was the first conversation they had with Our Lady like?

"Oh Immaculate Mary, you are the morning star that dissipates the darkness of night; we come to you with great trust!"

Angelo Giuseppe Roncalli, later Pope John XXIII, was born on November 25, 1881 in Sotto il Monte inBergamo, Italy. He was confirmed and received his First Holy Communion in 1889. Three years later, he entered the Seminary of Bergamo. In 1901, he went to the Pontifical Roman Seminary, thanks to scholarship that the Diocese of Bergamo offered him. He was ordained a priest on August 10, 1904, in the Church of Santa Maria in Montesanto, in Piazza del Popolo in Rome. The Bishop of Bergamo named him as his secretary. He continued this task until 1914. The war broke out in 1915 and he became a military chaplain for the hospitals. He also coordinated the moral and spiritual assistance to the soldiers. In 1919, he was named spiritual director of the Seminary of Bergamo. He was called to Rome by Pope Benedict XV, who named him the Italian president of the Society for the Propagation of the Faith. From then on, he was given many important tasks, such as his nomination as Apostolic Visitor in Bulgaria. He was ordained bishop in 1925, and served as such in many parts of the world. In 1953, he was created cardinal, and on January 25 of that same year was sent to Venice as Patriarch. After Pius XII's death, he was elected Pope on October 28, 1958. His pontificate lasted 5 years, during which he showed himself as a true shepherd, humble and attentive, decisive and brave. During his pontificate, he summoned the Second Vatican Council, which was concluded by Bl. Paul VI. He died on June 3, 1963. He was beatified by John Paul II on September 3, 2000, and canonized on April 27, 2014 by Pope Francis.

“A group of mothers placed all our hopes in the Virgin of Garabandal and we regained our children.” - Sara Urioste, mother of one of the October 1972 plane-crash survivors.

The story about the plane-crash that occurred in October 1972 is well known by many. However, the testimony of Sara Urioste, mother of one of the survivors, is less known. She attributes her son’s life and that of the other survivors to the intercession of the Virgin Mary who appeared in Garabandal.

The Virgin Mary teaches us that while She had asked them to make sacrifices and always do penance, these do not constitute the end that God expects of them. They are just a means to dispose the soul to be faithful, to love, and to be humble. If sacrifices do not produce humility but instead vainglory, they no longer please Her. What She expects from us is faithfulness in our daily duties and in the little things in order to be faithful in greater matters.