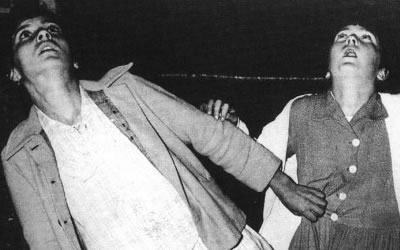 On June 19 and 23, 1962, the so-called "Nights of the Screams" took place. During the two nights, the visionaries were instructed regarding the "Warning" and the "Chastisement." The Virgin Mary revealed a vision to them of the Chastisement that would come if, after the Warning and the Miracle, the world did not change. The girls' screams impacted those who heard them to the point that the whole town went to Confession. Maximina says, "Each time a prayer was recited, the screams ceased, indicating that if we ask God for forgiveness, He will forgive us as the Second Message says." Fr. Valentin noted, "You could hear the girls cry a lot," and a woman named Eloisa de la Roza Velarde, who was also present, remembers: "The girls' cries were dreadful. They said, ‘Wait! Wait! ... They have to go to Confession, all of them! ... Oh! Oh! ...’ The people began to ask each other for forgiveness publicly." When the apparition was over, the people remained praying. When day dawned, a Franciscan Friar made his way to the church to hear confessions. Eloisa continues, "The whole town went to Confession. They were, apparently, confessions full of a truly extraordinary sincerity and repentance." 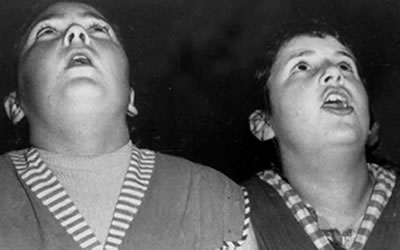 A message written by Loli and Jacinta expressed the Virgin Mary's great sorrow upon seeing how her messages were not being heeded.

In the face of this event in Garabandal, we should not be fearful, but rather take to heart the call to conversion made to us. In the last apparition, the Virgin Mary said, “I love you a lot and I desire your salvation.” In the Bible, we find numerous verses that console and comfort us, such as Psalm 46: “Thus we do not fear, though earth be shaken.” But of course, this applies to those who ask for forgiveness with sincere hearts and humility, and who try to hear the voice of God and live according to His Commandments. This is the way to live: loving God and neighbor. When we fall, let us not delay in returning to Him, because it has been promised to us: “Return to him with all your heart and with all your soul, behaving sincerely towards him. He will return to you and hide his face from you no longer.” We can find an echo of these words from Tobit in the Second Message of Garabandal: “If you ask Him for forgiveness with sincere hearts, He will forgive you.”

Let us trust in these words and place ourselves on the good path once again, under the protection of Mary, Mother of God and Our Mother.