Fr. Loring told me how he attended courses at the University of Comillas every summer in Santander, very close to San Sebastián de Garabandal. That was where he first heard about the apparitions.

When he was young, he used to travel from Cádiz to Comillas on small motorcycle loaded with books. At his lectures he set up a table with his books in case anyone wanted to buy them. On one occasion, going up Puerto del Escudo, between Burgos and Cantabria, the motorcycle could not climb up the steep incline. Back then, there were no cell phones or tow trucks to come to his aid. So there he was on the side of the road in his cassock when a truck driver saw him and recommended him to take a different route through Reinosa, which took longer, but was not as steep.
Fr. Loring was not an eyewitness of the apparitions, but he went to Garabandal many times after the events. He knew and spoke with many eyewitnesses. One time, when it was forbidden by the bishopric of Santander for priests wearing cassocks to go to Garabandal, a priest who was in Comillas wanted to visit. In order not to disregard the stipulations, they wore civilian clothes. Fr. Loring drove him there. But he was recognized as soon as he arrived because of his unmistakable voice.

It came to Fr. Loring's knowledge that Bishop Cirarda had sent some young journalism students to conduct a study on what happened in San Sebastián de Garabandal. This commission did not seem at all professional to him, so he went with a video camera. Maruchi Herrero lent him his house for the recordings. News reached the town that whoever wanted to give his or her testimony could do so, on identifying him or herself with their national identity document. Almost everyone passed through, including Jacinta who was spending a few days in Garabandal. Fr. Loring recorded eleven hours of video and went to the bishopric to give the footage to Bishop Vilaplana by hand.

On another occasion, Fr. Loring organized a pilgrimage to Fatima. At the end of a Mass, the group leader for Spanish-speaking priests said, "Father, do you know who you gave Communion to today?" “Me? To a lot of people." The organizer insisted, "You gave communion to Conchita from Garabandal." "Oh really? I would like to talk to her." The organizer spoke with Conchita and she received Fr. Loring at her house in Fatima and they talked at great length.

There were two Jesuits who used to go to Comillas: Fr. Nieto and Fr. Lucio Rodrigo. Both were named eminence and both had a lot of apostolic experience. These two Jesuits heard the confessions of the girls as well as the confessions of some of their family members. These priests knew all the facts and defended without doubt that the Apparitions of Garabandal were supernatural. Fr. Loring asked himself, "How could such young girls have fooled these two experienced priests?" 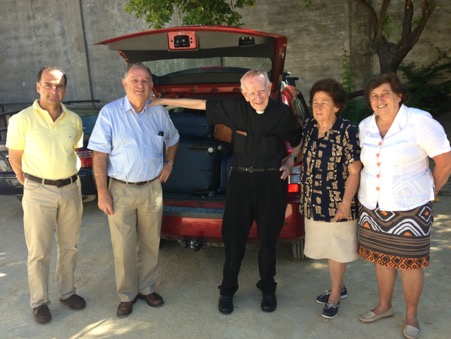 In July 2013, Bishop Munilla of San Sebastián organized a multi-day retreat for priests at the Shrine of Loyola. The meditations were directed by Sr. Briege McKenna. Father Loring, now 92 years old, was interested in going. When I found out that my sister Aurora and my nephew Alfonso were going to take a religious brother to the retreat, I gave Fr. Loring the opportunity to join them, and he accepted.

At the end of the retreat, my sister suggested passing by Lourdes. It was summer and we knew that Lourdes would be crowded with pilgrims. Fr. Loring said, "Let's go to Garabandal." My sister insisted, but his desire was clear. Fr. Loring explained why. During the retreat, he had spoken with another priest about his experiences in Garabandal and what happened to the eleven-hour recording. That priest recommended him to go back to Garabandal, tell his experience, and deliver it to the parish priest in order to send it to the Bishop. And that is what happened. Today we can see, on YouTube, the sincere and courageous testimony that Fr. Loring wanted to leave behind six months before he died.

And that’s not all. He went up to the Pines, and while he was praying a young woman came up him, and asked, "Father, can you hear my confession?" The answer was: "That's what I am for." Being the bearer of the God’s mercy for that girl was a great satisfaction. It was his farewell to Garabandal.