The Double Proof for Sarín 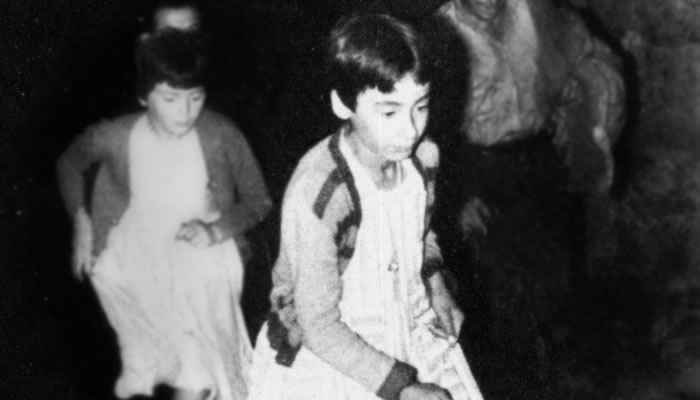 David Toribio was one of the young men that guarded the girls in the famous “cuadro” (square) of the “Calleja” and impeded the avalanche of people from surrounding them.  He was a witness to the unforgettable ecstasies, which he remembers with great detail, thanks to his extraordinary memory.

One day, not long ago, David ran into Sarín, a neighbor from Cosío.  Cosío is the closest village to Garabandal, in the valley.  Pilgrims were obliged to pass through Cosío on their way to Garabandal.  It was there that the road ended and the trail began that led to San Sebastian of Garbandal from the foot of the “Jormazu.”

Shortly after greeting one another, Sarín asked him, “Oh, Davizuco!  Do you remember what happened in the village in ’61?”  David answered, “Of course I remember.”  Sarín continued, “And do you still believe it?  Are you convinced of it?”  David affirmed with certitude, “Completely, Sarín.  More and more every day.”  The woman responded, “Me too.  But you can’t imagine how hard it was for me when the letters came out in the newspapers – the articles that said they came from the Bishop’s office…”

Sarín opened up her heart to David.  Many years had gone by since that summer in 1961, but the elderly lady still trembled when she remembered it.  As a young girl, she had a good and timid nature, and was pious and hardworking.  Sarín was not the type of person to read newspapers, but some of her friends did.  One afternoon, after having finished the work of the day, she went out for a walk with some of her friends.  Her friends told her what the newspapers had said about what was happening in Garabandal: that it could all be explained by natural causes; that it was not anything more than a childish game; that the ecclesiastical authorities recommended that no one go up to the little village…

Sarín could not believe it.  They had been living such beautiful things surrounding the girls’ ecstasies.  But for the simple people of the village, what the newspapers said had authority, because it was said “by those who knew,” by “instructed” people.  The declarations made by the local papers, sowed doubt and confusion in the heart of Sarín, which she confided to David.  “I became so sad that I couldn’t sleep that night.”

Indeed, Sarín spent the entire night thinking about how she could recover her previous certitude.  The next day, she was determined to go up to Garabandal to resolve her doubts.  However, she did not go up with the other young women of Cosío.  Normally, they went up together, after finishing their work at home and in the fields.  That afternoon, Sarín went up alone.  Halfway up, she sat beneath the shade of an immense oak tree.  She did nothing more than think about what sign she could ask the Virgin Mary to prove that she was really appearing there.  Lost in her thoughts she said, “Oh, my Lord!  Oh, Virgin of Carmel!  What do I ask of the girls?  What do I ask for?”  All of the sudden, it occurred to her: the chain.  She felt around for it on her chest until she found it among her layers of clothing and clutched it tightly between her fingers.  If the Virgin Mary really has been appearing in Garabandal, she would know because of the chain.

She continued on her way again until she reached the village.  Upon entering Garabandal, she ran into Mari Cruz, who had just come out of her house.  Mari Cruz recognized her and greeted her with affection.

Mari Cruz put on Sarín’s chain and went on her way.  She had to fetch water for her mother from the fountain and bring it to her house before the apparition began.  The little visionaries continued to be just as responsible for their work as always.

Every day, the girls received an authentic, mountainous pile of medals, chains, rosaries, wedding rings… that they wore hanging around their necks and arms when they had apparitions.  They presented them to the Virgin Mary so that she could kiss them.  Two things were commonly known by everyone and had been proven over and over again. First of all, the Virgin Mary returned the kissed objects to their owners with perfect accuracy.  Secondly, she never kissed the things that she had previously kissed before.  Sarín’s medal was already kissed by her.  However, with all the medals that were presented to the Virgin Mary every day, it was impossible for the girls to remember which of them were kissed and which of them were not.  It could have been a different medal, or perhaps one of her relatives could have given it to her since they could not come…

When the girl went away, Sarín recollected herself and humbly prayed, “Virgin of Carmel, Virgin of Garabandal, I am going to hide.  The girl should not only come to say to me that it’s already been kissed, but she should come and find me where I’m hiding.”  Sarín confessed to David with embarrassment: “I dared to do all that.”

The village was full of outsiders waiting for the trance to begin.  In the midst of the bustle, no one realized what Sarín was doing. With agility and discretion, she hid her little body in a lost corner.  From her hiding place, Sarín waited to see what would happen.  She knew when the girls had begun to return the kissed objects because of the pilgrims’ shouts of surprise and joy. All of the sudden, she saw Mari Cruz direct her steps towards the place where she was.  She instinctively curled up in an attempt to remain unseen, but it served for nothing.  The girl continued forward until she was in front of Sarín.  With a quick gesture – her head always looking upwards and her eyes fixed above – she placed the chain around her neck and said in a low voice, “Sarín, the Virgin Mary said to me that it has already been kissed.”

Her doubts were completely cleared up.  The two proofs she had asked for had been granted.

David finished his account with a cry of joy, “This is incredible!  They are pure miracles!  Miracles as clear as day!”