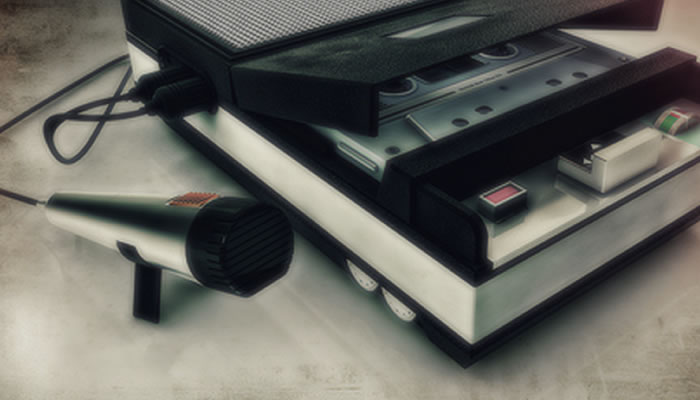 This story is taken from the report written by Fr. Jose Maria Andreu, S.J., an eyewitness of the apparitions.

This is a story that took place during the first days of August and it concerns a tape recorder. A man brought a battery-powered recording device and recorded what the girls said in ecstasy at the pines. I have reference to this event through Fr. Jose Salceda from Aguilar de Campoo, a witness of the following account.

When the vision ended, the tape recorder was set to play so that the girls could hear it. When what corresponded to the ecstasy finished, some of the girls’ words in normal conversation were recorded and they were asked to request the Virgin Mary to speak for the tape recorder.

While they were still speaking, the girls suddenly fell into ecstasy. In this state, they asked the Virgin Mary to speak into the microphone so as to record her voice.

When the vision ended and the visionaries returned to their homes accompanied by their parents, the quite large group of people who remained played the recording to see how the recording had turned out. When it came to the part where the girls asked the Virgin Mary to speak, “an unmistakable and very sweet voice came out of the device and said: “No, I will not speak.”” These are Fr. Jose’s actual words.

The excitement was great and several people were moved to tears, saying that it should be brought to the Pope. They re-played it and in the midst of the suspense, when it came to the above-mentioned words, nothing was heard.

Distraught, they went down to Conchita’s house  so that she could hear what had been said during her companions’ ecstasy. She had not taken part in the previous vision. When it came to the part where the Virgin Mary spoke, once again, the voice was heard: “No, I will not speak.” Upon hearing it, Conchita smiled and said very happily that it was the Virgin Mary who spoke. They wanted to re-play it, but it hasn’t been known to have been heard again.

At the end of the vision, the girls said that the Virgin Mary smiled when they told her to speak for the microphone. An analogous scene, at a great distance of time and space, is one that occurred in Lourdes. I will cite “Redención” (August-September, page 354) “…They continued to pray the Rosary. When they finished, the lady (one of Mary’s daughters) gave the girl an inkwell, pen and paper and said, ‘Ask that Lady what She wants and ask Her to write it down.’ Bernadette obeyed. She got up and walked towards the grotto. Moments later, she returned to the two women. ‘The Lady smiled when I told her.’”