"I burst into tears and asked God to forgive my disbelief" 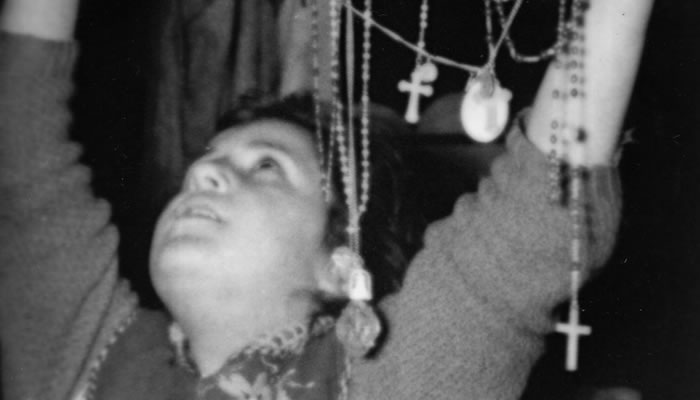 Half of the village and all the outsiders, including children, followed her astonished by what was happening. We'd just seen her in her modest village kitchen, chatting with us, even though she was half asleep because it was 4 o’clock in the morning, and now we were seeing her suddenly in ecstasy and falling down upon the hot kitchen stone floor without burning herself.
As if carried by angels, she got up and began to walk around the village. We followed her, tripping here and there because it was dark, and getting dirty with the mud.
I asked God with ardent faith to be able to believe, like everyone else, in the miracle.
Following her, as she went lighting the path as it were, we went down almost all the streets in the village, to the church, to the graveyard, to the hill where they'd seen the Virgin Mary for the first time.
The path was difficult, it was dark and my clumsiness meant that I tripped on every lose stone and little by little I lost heart. I couldn't go on so I decided to just wait for them to come back. My wife didn't want to stop, despite the fact that she was exhausted, and kept on praying for a remedy to my disbelief.
Suddenly, the girl stopped before reaching the top of the hill, and started walking backwards. She sort of slid over the stony path, smiling with her eyes looking upwards.
When she reached where I was waiting she stopped and fell to the ground. Her knees hit the ground hard, yet she did herself no harm. It was as if she had fallen on a carpet. She lifted the Cross upwards and then gave it to me to kiss.
Around her neck she wore the medals and rosaries of all those who were there. She tried to pick out a necklace and said out loud to the invisible apparition, "Tell me which one it is". She lifted up with her hand a medal for the Virgin to kiss. We heard her repeat: "Well, tell me which one it is".
Without further ado, she turned to a woman there, opened the gold necklace and placed it round her neck.
Overwhelmed and crying the woman fell to her knees, as I did myself and many others who witnessed the beautiful scene. The girl made her kiss the medal kissed by the Virgin and helped her to get up off the ground with an angelic smile that we'll never forget.
In the same way and with similar words, she put my own medal kissed by Our Lady around my neck. I couldn't contain myself and burst into tears falling to my knees.
In that moment I found the explanation of everything that I hadn't understood till then. In the girl's heavenly expression I saw reflected the invisible presence of Our Lady of Mount Carmel.
Kneeling down I burst into tears and asked God to forgive my disbelief.