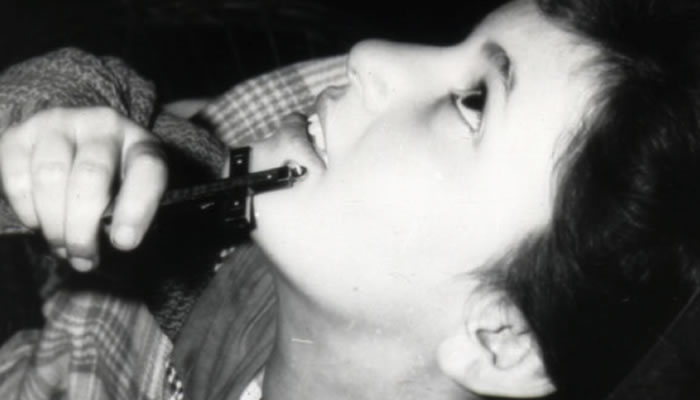 Celina was a young mother who didn't live in San Sebastian de Garabandal but who went there frequently in order to visit her mother. Her family told her everything about what was happening there in Garabandal. She found it hard to believe everything they told her about the apparitions. How could she believe? She'd known the girls before they were born... How could it be true that an Angel and Our Lady were appearing to them?

The first time she went up to Garabandal after the apparitions had begun, she went with the idea of seeing exactly what was happening to the girls. She said to herself: "I have to see the girls for myself, but when they're not in ecstasy to she if they've changed at all, why they're doing all this and what is going on with them. They can't be the same, they're just as uneducated as... as everything here".
As soon as she arrived at the village she left her children with her mum and went out to look for the girls. She wanted to get a sight of them before they went into ecstasy, she wanted to speak to them... she wanted to understand exactly what was going on with them. She went up to Conchita's house. Seeing Our Lady didn't mean that the girls were exempt from the ordinary family duties. In Garabandal, just like in other mountain villages in Cantabria, the children began from an early age to help out with the work in the fields and to take care of the animals. Celina found Conchita bringing the sheep back to the stall. She observed her for a few moments at a distance. Conchita didn't realize that Celina was there: "The sheep were going in as she counted them. I was there, patiently waiting to see her... I was looking at her face. I didn't see anything different. As soon as she finished counting the sheep she looked up, I began to go towards her and suddenly she fell into ecstasy".

Celina was the only one there to see Conchita fall in ecstasy. She was overwhelmed to find herself clearly in the presence of something supernatural that she had denied: "Oh! I began to shake all over... I felt bad because I thought that I should have gone to confession first because I wasn't prepared for God to grant me to see this".

Conchita began to walk behind the Virgin. Some other people realized what was happening and began to follow her. Celina, who's mind had changed completely from when she'd arrived at the village, also began to walk behind Conchita: "From then on I was speachless... when they spoke about whatever was happening there I always interested and I tried to keep on top of it as much as I could".

Among the many memories that Celina has, she remembers one afternoon in which she says that she needed to be "educated" by Our Mother. That afternoon everything seemed funny to Celina and she couldn't stop laughing even after the ecstasy began. It wasn't for lack of respect; she wasn't able to control herself and to help maintain an environment of prayer and silence. Dr. Celestino Ortiz, a doctor from Santander, was present. When the girl entered into ecstasy he couldn't control his emotion and exclaimed enthusiastically: "Look at her! Look at her! Look!" Celina turned to her aunt who was with her and with a voice broken with laughter whispered: "all that needs to happen now is that he falls into ecstasy too". And she began to laugh and laugh.

After a short while somebody said that Loli had entered into ecstasy also. Celina and her aunt went up to see, Celina could still not put an end to her laughter. To her surprise the girl came up to her with the crucifix in her hand. The girls had never offered Celina the crucifix to kiss it. When she had it in front of her she kissed it almost automatically without giving it a lot of importance, without being really moved by compassion or love towards Christ Crucified... The girl made the sign of the cross over her. But, as if Our Mother wasn't satisfied with the badly given kiss, the girl put the crucifix once again in front of Celina. Celina kissed it again and was blessed again. This time she began to understand and she was deeply touched... For a third time the girl put the crucifix in front of Celina to kiss it and blessed her for the third time....That time Celina kissed it with all her soul and, crying, she fell to her knees asking for forgiveness. Celina learnt a great deal that afternoon. She meditated a lot on this gesture of Our Mother and it was a lesson that led her to a great spiritual progress.

Her aunt helped her up and they began to leave the crowd behind so as to reflect in silence on the lesson received. Ceferino, Loli's father, jokingly said, "You thought you were so strong, didn't you? But now you've given in".

Telling this story some will say that it is just a coincidence that the girl gave her the crucifix to kiss that day. The thing about Garabandal is that so many "coincidences" come about that one begins to have to think that there is a "will" that is directing all these events, whether they be big or small, and that knows the heart of each of their sons and daughters, that knows their needs, what they lack, their intimacy and desires. Without a doubt many of the stories of the apparitions in Garabandal seem to be directed by a "maternal hand".