“I Saw the Whole Communion”

“I Saw the Whole Communion” 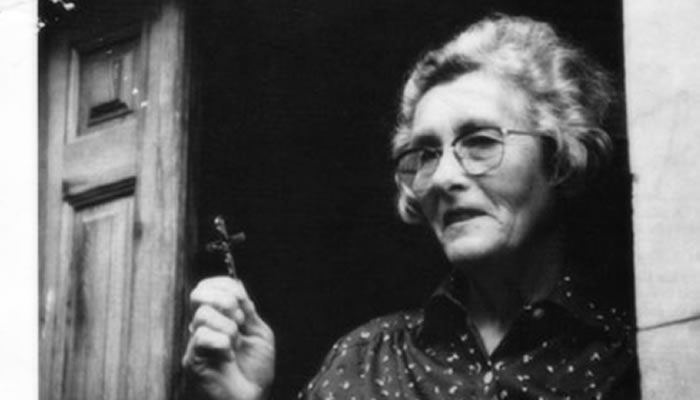 Josefina Cuenca was 91 years old when I met her. I remember her seated in her armchair, almost blind and barely able to move, but very well taken care of by her youngest daughter. As I entered the room, her daughter spoke with a loud voice into her ear, “Mom, some people have come to see you. They want to hear you talk about the apparitions, if you want to.” Josefina lifted up her head, and her face was transfigured with a radiant smile, beautiful, almost unbelievable considering her poor health. She began to speak with her cracked voice and very slowly, as she did in the last stage of her life. Very emotional, she said, “I saw the whole Communion.” I sat down on a stool by her side and asked her, “And what was it like? There were lots of people who saw it, right?” She responded, “Our Lady made it happen.” She kept silent for a few seconds… it seemed as if the scenes from the night of July 18, 1962 were being replayed before her eyes. It touches me to see how the experiences lived in those years remain engraved in the hearts of the witnesses. That night, the Blessed Virgin had agreed to do a miracle, as the girls had asked of her. She was true to her promise to make the Communion that Conchita would receive from the hands of St. Michael visible to all the bystanders. The funny part is that, while everyone was astounded by this announcement when what would happen was revealed to Conchita, to her it seemed so small that she referred to it as “the little miracle.” It seemed so insignificant to her that she dared to say to the angel, “So, I guess the miracle is going to be small then.”

Josefina lived very close to Conchita’s house and was a good friend of her mother, Aniceta. She had often accompanied Conchita and her mother to pray the rosary in the “Cuadro” in the dead of winter, before daybreak. Our Lady had asked the girls to make this sacrifice, and they did so morning after morning, although many times it rained and sometimes even snowed.

But Josefina was a young housewife with small children. If her husband or her mother were not able to stay with the kids, she could not leave the house to run after the girls in their ecstasy. That is why on the night of July 18, 1962, she had resigned herself to the idea of staying home and hoped that her husband would tell her all about the apparition when he returned. At one point during the evening, she opened her front door. Maybe she was hoping to hear that way what was happening in town. “And what a coincidence!” Josefina said amusingly, that when she opened her door she saw her cousin coming to her house to speak with her. Josefina stepped outside so as not to wake up the children with the sound of their voices. Her cousin, who had just been at Conchita’s house, was saying, “What’s going to happen? Will there be a miracle or not?” Josefina, very confident, responded, “Oh yes, there will be.” Her cousin agreed, “That’s what I think, but it sure is taking a long time.” Her eyes turned towards Conchita’s house in the exact moment in which the young girl, in ecstasy, walked out onto the street. Her cousin said, “Let’s go and see if we can find a spot up front.” They started walking when Conchita suddenly fell to her knees right in front of them. They could see her face perfectly; there was no obstacle between them.

Josefina was right. The fact that she could be a witness of “the little miracle,” was certainly something that Our Lady made happen. There were about five thousand people in the village, and she was not even going to leave her house that night… but there she was, about three steps away from Conchita, face to face with her.

A ring of people formed around the girl in ecstasy. Josefina emotionally remembered the profound silence that encompassed everything, a silence full of respect for the faith and for that which is sacred. Full of expectation, she watched Conchita as she stuck her tongue out of her mouth. She held it in that position long enough for Josefina to assure that there was absolutely nothing on it. It was if time had stopped. Conchita’s movements poured forth devotion. A large white host appeared on the girl’s tongue. Josefina was amazed to see that the host was larger than what they received in each Eucharist from the hands of their priest. Also, the instrument with which the host was pressed made it look like it had a thicker border around it. The host was so white that it gave her the impression that it was radiating light.

Suddenly, someone in the crowd could not contain her impatience, and stepped right in front of Josefina to get a better look at what was happening. Josefina was very displeased, but since she was a woman of profound faith, she remembered that she was before the Blessed Sacrament, and that it was neither the time nor the place to complain and make a fuss. “In the presence of what was in front of me, I remained quiet and I just let her be. I said, ‘I saw it,’ and that was essential for me.”

As she lost sight of the girl, she noticed the presence of a man she did not know- an “outsider,” as they say in Garabandal- who was trying to take a photograph, but was unable to turn on his camera because he was so nervous. Now, at 91 years of age, she laughed remembering the predicament of the poor man: “He kept pushing buttons but it just wouldn’t work.”

After telling her story, Josefina leaned back in her armchair and murmured, “That sure was something. It was really incredible.”