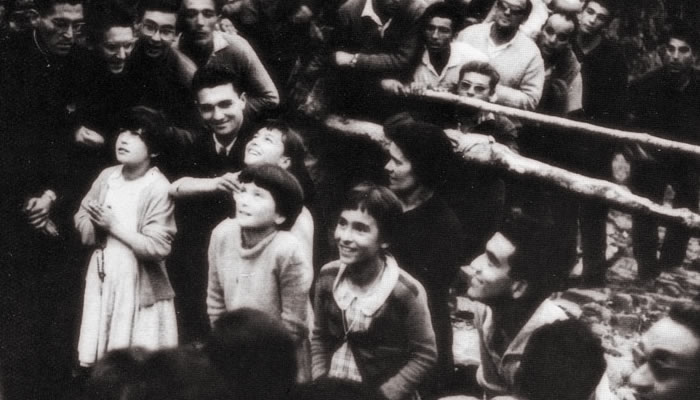 David Toribio was one of the young men that protected the girls when the apparitions in San Sebastián de Garabandal began. A few days ago he made me think about something that I had never realized, and it is how the neighbors from Cosío helped the uncountable pilgrims that would go up every day to Garabandal. David says that someday homage should paid to all those men and women, who without attracting attention, helped the visitors in their “adventure” up to the town of the apparitions.

At that time, the paved road only reached Cosío. After that there was a steep and frequently impassable road that led up to Garabandal.  It was so bad that delivery trucks would not go up to the “Jormazu” landing where Garabandal was situated. The town’s tavern owners had to use donkeys to bring up supplies from Cosío for every family.

A man named Leoncio, the town mayor of Cosío, was very attentive to the pilgrims. When visitors did not dare to go up the road alone for fear of getting lost on the mountain, Leoncio would call some of the town’s children and, giving them a small tip, ask them to accompany the people to Garabandal.

A woman from Cosío, who was the same age as the girls (visionaries), remembers being a guide for three men from out of town one day. Leoncio called her with two or three other children and he gave them fifty “pesetas.” He reminded them (as he always did) how they were to behave. They had to be discreet and not get into the adults’ conversations. If the pilgrims needed to sit down and rest, they should let them sit in the shade. They should then sit about twenty yards away so that the visitors could speak calmly amongst themselves. After arriving in Garabandal, they had to indicate who the visionaries were, tell them their names, show them where they lived, and then wait to return to Cosío with the visitors.

After listening to all of this, the three children led the three men up the road. The men were very ill-disposed [towards Garbandal], and did not hide their intentions. On the contrary, they outwardly manifested them. They were convinced that Garabandal was a farce and the purpose of their trip was to clarify things and reveal the truth. The children were astonished by this, but did not enter into their conversation. When they reached Garabandal, the children pointed out where the girls lived. Later, they went to spend their fifty “pesetas” and to have a good time while they waited for the three gentlemen to finish their “undertaking.”

The surprising part was when these men called the children to take them back to Cosío. One of the children observed them with curiosity. The same men that had talked the whole way up, panting and wheezing in the ascent, seemed to be mute now. What had they seen in Garabandal to cause such a change in them? The thing is that their plans to destroy Garabandal had disappeared. They were bewildered and walked separately, as if they did not know each other. They were so lost in their thoughts that they didn’t even watch where they were going and went tripping the whole way down.  It was obvious that what they had seen and experience had taken away all their desires to “put an end” to Garabandal. They got into their car without even saying good-bye to their young guides, and left very quickly.

I hope that once at home they were able to sincerely reflect on their experience, and later, were able to return to Garabandal to live, with a better disposition, another day with Our Lady.