Can they ask Our Lady for greater miracles than these? 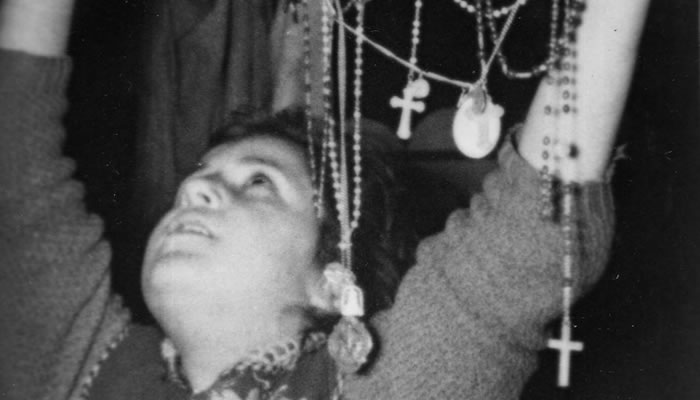 The news that Our Lady was appearing in San Sebastián de Garabandal spread quickly, which meant that before long, people from the surrounding villages also began to frequent the apparitions. Some went up with a mixed feeling of curiosity and expectation, while others were sure that what was happening was true. Consuelo Díaz, who was 13 at the time, lived in Puentenansa, a village about 9 kilometers from Garabandal. She began to go up to Garabandal on a regular basis with her mother and her aunt. As Consuelo was a young girl with a lively character, she often managed to get to the front of the crowds to be able to see up close everything that went on during the apparitions.

Today's story took place during the first weeks of the apparitions, probably towards the end of July or beginnings of August 1961. The villagers and outsiders all crowded around the girls. People from further and further away began to go to Garabandal to see the extraordinary events that were taking place, and on the afternoon in question, there was a great number of people waiting for the apparition.

Young men from the village were in charge of making sure that the girls were well protected, and they did not allow anyone except the local police, priests and doctors to stay in the "Calleja" during the apparition. They made everyone pass into the fields that were at the right and left hand side of the "Calleja" while the ecstasy took place. Consuelo managed to get to the front row and had a good spot. It was getting late and the sun was already going down. At Consuelo's side was a lady who had come to Garabandal for the first time with her husband, son and daughter-in-law. The girls suddenly arrived, but they were not in ecstasy yet. The lady went up to Conchita to give her four medals so that Our Lady could kiss them. Conchita kindly took the medals and hung them around her neck where she had already hung a great number of other objects.

The apparition began and at certain moment during Conchita's conversation with Our Lady, she began to solemnly pass her the medals to kiss them one by one, so that it was almost night when she had finished kissing them. Suddenly Conchita, still in ecstasy, got up and went towards where the people were gathered to watch the scene in respectful silence. She went into the field and headed straight to where the lady was. Her head was looking upward the whole time as she walked through the field full of people without tripping even once. Without really seeing her, she stopped in front of the lady who was situated at Consuelo's side. The lady held her breath full of emotion. Conchita began to take one of the medals off her neck without it getting tangled up with all the others she was wearing. Consuelo could see clearly everything that was taking place. Conchita placed the lady's medal over her neck, and it was indeed hers. Then she went up to the lady's husband and gave him his medal, then to her son and did the same taking his medal and hanging it over his neck just like she'd done with others, without looking and without it getting tangled up with the other medals. Finally, she went up to the lady's daughter-in-law and gave her back the correct medal. Consuelo still recalls how the lady began to cry out, touched by an uncontainable emotion because of the supernatural happenings taking place: "She didn't know my husband, nor my son, nor my daughter in law… she hadn't even seen them. I gave her these four medals altogether, she only saw me, and she didn't know who they belonged to. I gave them to her at the same time… How could she know whose was whose? What other miracle could they ask for? What more can we ask our Lady for?"

Consuelo never forgot what she saw and it was certainly a scene worth remembering. If it wasn't Our Lady who was indicating the girls, what explanation is there? And how can we explain that not just once, nor twice, nor three times did this take place but on daily basis? Hundreds of times, hundreds of objects were given back in this way without any error taking place. The girls always knew to whom the medal belonged and where the owner was among a multitude of people. Furthermore, they always returned the correct medal to its owner without them ever getting tangled, although the sun had already gone down and darkness surrounded them.

What other sign can we ask Our Lady for?