Queen of Heaven and Earth 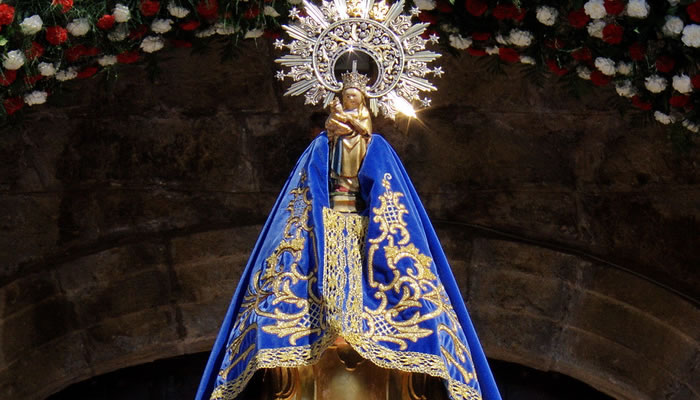 «Since Jose Eguino Trecu was Bishop of Santander—he died in 1961, shortly before the apparitions began—it had become customary to finish praying the rosary with the following prayer: “Our Lady of Bien Aparecida, Queen and Mother of the Mountain, pray for us”, this was prayed three times and followed each time by a Hail Mary.
It was also Bishop Trecu who proclaimed Our Lady, under the title of the Bien Aparecida, Patroness of the whole Province of Santander, Cantabria, where there are many different shrines dedicated to Our Lady under many titles. The Shrine of the Bien Aparecida is situated in a beautiful location above the Ason River, with beautiful views of Udalla and Ampuero. The Trinitarian Fathers attend to the shrine. The statue of Our Lady of the Bien Aparecida traveled from her shrine to Santander, the Capital of the Mountain, to be canonically crowned by Bishop Trecu in his last years.»

«Bishop José Eguino Trecu said that the town, St. Sebastian of Garabandal, was so faithful in its faith life and so devoted to the Blessed Virgin Mary that something very big was going to happen there in the future.
These words of Bishop Trecu were fulfilled. During the apparitions, Mary appeared as Mother and Teacher but God also highlighted other titles of Mary, who is at the same time the 'humble handmaid of the Lord.'
During an ecstasy, after the rosary, the girls prayed the Creed; and as always during the ecstasies, they added 'Apostolic' and 'Roman' to the 'Catholic Church'. At the same time they also modified certain final prayers that were said—for example, instead of saying “Our Lady of Bien Aparecida, Queen and Patroness of the Mountain” they would say “Queen of Heaven and Earth.”»