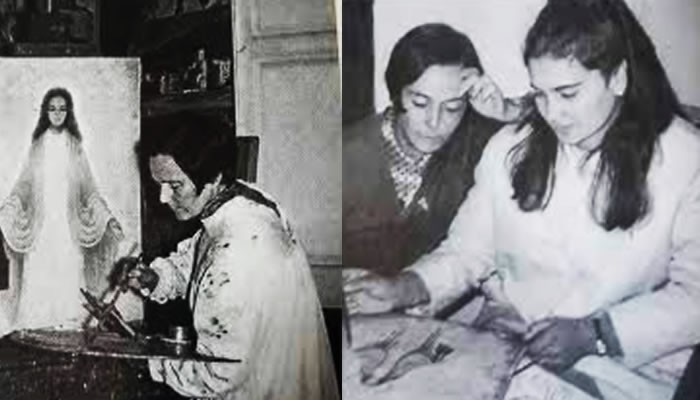 Summary of my conversations with Conchita—in Burgos, from November 7 to 15, 1967—about the apparitions of Garabandal. I wanted, with her help and that of the Blessed Virgin, to bring to the canvas something that would recall well what those heavenly scenes were like.

I showed her, among several sketches, the one of Our Lady of Garabandal—she had directed me how to do it, first in the village and then in Pamplona—from which came the image that is venerated today in the chapel of the Archangel St. Michael in Garabandal, also reproduced in colored holy cards that are all over the world.

“Your Virgin Mary is fine, you just have to make her dress more graceful. There were no clouds: only LIGHT... Sometimes she smiled so much that you could see her teeth. Her hair was a little wavier. The flowers on the dress were like white embroidery... The scapular, all in one piece, and somewhat larger.”

“What was the meaning of the eye of the first apparition? Was it like that?” (I drew a picture of it.)

“No, it didn't have those lines: it was a normal eye, with eyelashes, brown, and I don't know what it meant... The light was all the same, and where there was the most light, it was here.” (She pointed to the big eye drawn on paper, and she situated me in the exact place, distance and size according to it, without a single hesitation.)

She added shortly after:

“That day many things happened in the apparition. One of them was a shower of stars. All four of us saw it: Loli, Mari Cruz, Jacinta and I.”

“How did they fall? From her hands?”

“No, no. They fell from above, as if it were raining.”

One of my sketches represented the Virgin Mary on a red cloud, as I had read something about this in a book.

“We did not see the Virgin on a red cloud. What happened was that one day when we were not in ecstasy, she enveloped the four of us in a red cloud and we were very frightened.”

Another sketch depicted Our Lady on a star with a long tail, and the four visionaries kneeling at her feet.

“Yes, once a luminous star with a long tail passed by. But it passed by, it did not stay at Our Lady's feet. And it was not the four of us, but Loli and me. It was a day of Our Lady of the Pillar.”

In another sketch Our Lady appeared as the Queen of the Angels, surrounded by them.

“I did not see the Virgin surrounded by Angels. But I do not know if the others would see her like that.”

“How did Our Lady bless and kiss you? Like this?” (and I showed her another sketch.)

“She did not bless us, but she did kiss us. And she faced us. She came down to our level, and when sometimes we did not reach her, we would lift each other up.”

At the end Doña Isabel asked Conchita: "Can you explain to us something that I can bring to the canvas that might cause fear?" to which Conchita replied, "No. What I have seen that causes fear is the CHASTISEMENT, and this I cannot tell you... Besides, you will not move souls by horror and fear."